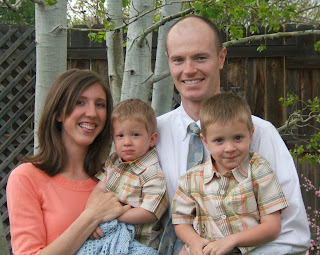 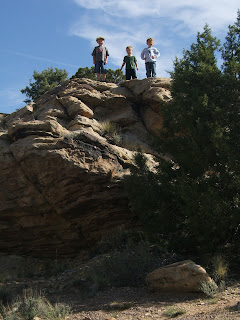 I am still getting used to this...so the pictures went on here a bit differently than I imagined. The first is of us on Easter Sunday. The second two are of a hike we took. Jackson's sister, Julia and her two boys were here in Grand Junction for the week before Easter. We decided to go on a hike, so me, my two boys...Julia, her two boys...and Amber (my sister in law) and her one boy and two girls packed a picnic and set off. It was such a blast. We did make one mistake, though. We hiked too far before we stopped and ate lunch. By the time we started heading back, all the kids (and the moms) were tired! There were three of us moms and there were 4 children that needed to be carried most of the time. By the end we were proceeding like this. Julia and I would get as many kids as far as we could and then one of us would stop and rest with them while the other went back to help Amber carry the other two. It was long and tiring, but well worth it and we will know better for next time. The favorite thing for the boys to do was to send "boats" (little sticks or leaves) down the stream. The also LOVED climbing up the big dirt hill as far as they could and then sliding back down. Everyone was full of dirt when we were done. It was great! 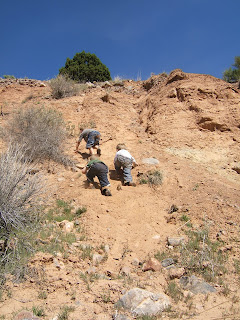 I am dying to go on a hike! It sounds like you all had a lot of fun, besides the kids outnumbering the moms and needing to be held towards the end :). I'm so glad you started up your blog again! Love ya!

Jen, I'm so glad you started blogging again too! I miss you and your "We can do anything" attitude. I bet you're such a great mom. I don't know if I could carry kids back and forth like that on a long hike! Especially prego! Looks like you're having fun. You've inspired me to go hiking. Maybe I'll get Tal to go with me this weekend...love you!