About six months ago Nicholas started saying he wanted some hamsters. I didn't think much of it until he persisted in the request for months. Finally, I explained the work that he would have to do to take care of them. He seemed fine with that. Then I explained that I didn't want to pick them up to take them out of their cage when it needed to be cleaned, and that he would have to do it himself. When my mom was here helping after I had the baby, she took him to the pet store to see if he would be brave enough to hold one. Unfortunately he was :) I was hoping that he wouldn't dare to hold it. He persisted in asking for one and saving his money to buy it. Finally, we broke down and bought a cage and one hamster for the family and Nicholas bought one hamster for himself.

They have been ideal pets for me. They are very quiet, don't smell, don't require any attention, and entertain the kids sometimes. Nicholas gives them food and fresh water every day without complaint. We had one eventful time last week when we were cleaning out the cage and one got loose. We chased it all around the house, but Jackson wasn't home and the rest of us were too chicken to grab it (I know, we're pathetic, but it was making chittering noises whenever we would touch it). I finally got smart and used a cup to scoop it up and into the box. Whew. 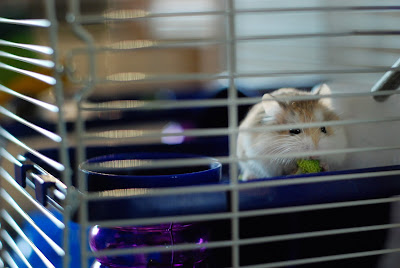 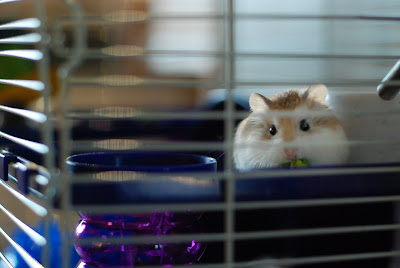