I have been wanting to get more into photography for a long time now. I have read lots of books and am talking about it all the time. Jackson decided that I needed to just go for it, so we bought photoshop elements 6.0 and I signed up for a two night class on the program that was offered at a photography studio here in town called 13 Photography. I didn't want to pay for both the beginning and the advanced class, so I just signed up for the advanced class and tried to figure out the basics on my own before. I just finished the class and it was SO great! I haven't had much time to put into practice the things I learned, but here are a few pictures from our recent trip up the Monument that I played with. 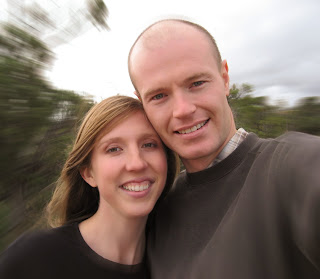 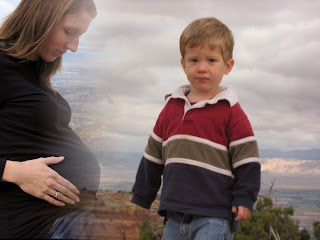 I plan on doing something like this with some pictures of the new baby...or maybe some old pictures of the baby boys, but I didn't have any of those old pictures on Jackson's computer, so I practiced on this one. I can only play with photoshop when Jackson brings his computer home from work, because the one we have at home is too old and slow to even download photoshop onto. 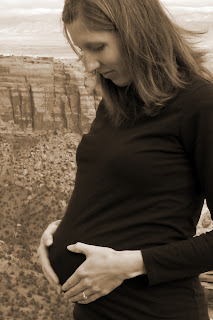 Jackson insisted on taking pregnant pictures of me this time. I think I will be glad I have them in the future.

I love these pictures- and what a great idea to take a class- you are brave to go for the 'advanced course'. Fun! Glad you and baby sister are doing well. Oh, and i'm adding you to my list so I remember to check up on you more often!

cute, good work! it's fun to take classes and get into a hobby, i miss going to my cake decorating classes

I really really want to take a Photoshop class and get the Canon Rebel camera! Once I get the camera then I will go from there. I am asking Santa for it for Christmas!

Jen,
You are too cute preganat. You look like you have a little cantalope in you belly, I had a watermellon!We your kids are growing so much. I love the supercalifragalitic song Thomas sings, I was very impressed.
Chelle

Fun pregnant pictures, except that you barely look pregnant even. What is the deal? When I am pregnant, there is just no mistaking it... my whole BEING screams pregnant! You have this teeny little grapefruit on your belly. I love that first one how you and Jackson are kind of flying through time. =D

You are all too sweet! The shirt I am wearing must be very slimming...I think I will wear it more often!

Jen! I just got Photoshop Elements for Christmas! We'll have to talk and share ideas. I took a class on it in high school but a lot has changed since then. You guys take great pictures too. You are WAY brave to go for the advanced classes. I miss you Jen!!