A few things to remember

These are a few random things I don't want to forget. Earlier this week Estella stuck a big pea up her nose. Jackson had come home for lunch and we were all sitting down at the table eating. Estella had some peas on her high chair tray and was happily eating them. She held one up to her nose and looked at us a bit questioningly. We calmly pulled her hand away and told her "no." Well...not three seconds later she shoved one up there so fast we didn't have a chance to react. We didn't want to push it up farther, so we tried to get her to blow her nose into a tissue, but she wouldn't do it. I tried to suck it out with a bulb syringe while plugging her other nostril, but that didn't work either. I called our doctor's office to ask for some advice and they said they could see her if we got there within 10 minutes...so we rushed out the door to the doctor's office.

The doctor has us try to blow it out threw her mouth by plugging her clear nostril and puffing some air in through her mouth...kind of like mouth-to-mouth resuscitation, but that didn't work. So...Jackson, a nurse, and I all held her down firmly and the doctor used a thin grabbing tool up her nose. He grabbed it and pulled it out right away. Essie was mad, but at least it was out of there.

The doctor gave us the pea to take home, but it was so gross looking I just took a picture and threw it away. Three kids...and Estella is the first to stick something in her nose...let's hope she's the last! 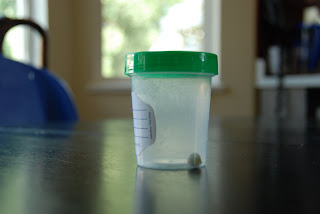 We planted beets this year for the first time. They are so much bigger that any beets I have ever seen! I have been experimenting with beet soup, beet salad, and shredded cooked beets. 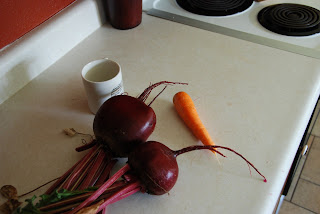 A few nights ago about 15 minutes after Jackson and I had put the boys to bed, Nicholas came running down the hall visibly excited. "Mom! You have GOT to see this!" Usually after I have put him to bed, I don't go back into his room, but he was so intense I was curious. I walked into his room to see two empty shelves on the book shelf and all the books piled high on his bed. He was so happy with his accomplishment, I didn't have the heart to tell him I didn't like it, so I just piled the books at the foot of his bed (which is actually the head, but Nicholas likes sleeping with his head on the other side) took a picture, and kissed him goodnight.
What a silly little boy! 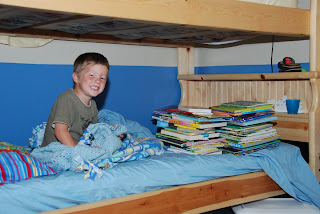 Jen you have the cuttest kids in the world!! I miss you guys, i think i might have to run away to your house one weekend.;)

Kaylee got a little red pom-pom ball up each nostril when I was tending her when we were little, it's scary huh! My aunt had to get it out like that too!

Love the pea story! I think I would have pinched her nose together to see if I could flatten it and then see if it would come out....I am sure it would have done more harm than good though!