Jackson's Side of the Story

It's a pretty big blur, but as I write it will come back. It was Sunday morning and I was laying in bed. The whole week prior I was on edge about the possibility of the baby coming. Restraining the idea that the baby could come anytime, yet excited for when it would happen. 15 months of pregnancy is for whales and elephants, definitely not humans.

Jen had been hiding contractions from me so I was constantly asking her if she was having one and trying to read the body language as well as the facial expressions because sometimes that was the only way to really tell if it 1) was a contraction, 2) was a good contraction. Jen spoke up, pulling from my reverie, and said she was having contractions. In order to betray my excitement I thought, "oh, well, this will probably wear off. It will last a little while and stop." She seemed pretty calm yet quietly excited. Excitement breeds excitement and I again had to curb the emotion.

To distract the kids I pulled up a Veggie Tales move on NetFlix. The contractions continued, and the excitement mounted. I called my mom before she left to pick-up Grammy for church and told her that she may want to be ready to come over and take care of the kids, and was careful not to squirt anxiety through the phone adding, "it's probably nothing, just precautionary." She promised to keep her phone with her and would check for a text during church.

Jen was now sitting down for contractions and the exercise ball was making the contractions easier to bear. I texted my mom and she and my dad came over from church to be with Thomas, Nicholas, and Estella. I started getting them ready for church, but Thomas was determined not to go to 2nd ward. He just wanted to go to 5th ward, after some debate the consensus was to skip church altogether and come visit the baby when he arrived.

We loaded (overloaded) the van with the hospital bag, the exercise ball, the car seat, and my cello. The cello came on Dr. Robbins recommendation. He told us that when he brings his guitar to the hospital he never has time to practice it because things go so quickly. When Jen called labor and delivery to let them know we were coming in Dr. Robbins reminded her to bring the cello.

By now we were certain the baby was coming. It was approximately 10:15am. The nurse checked her in, hooked her up to the heart monitor and contraction monitor (I love the contraction monitor because I know before she does when a contraction is coming) and then checked her. She was only dilated 4 cm. They monitored the baby for a half hour or so then let Jen un-hook and walk around. She used the hospital's exercise ball and I took pictures of the view out the window (labor and delivery is in the new tower and has beautiful views of the valley). Jen called her mom, I called my parents...waiting waiting. The contractions started to get stronger and Jen preferred to lay down now for them. It was probably about 12:00 and she was asking me to count through the contractions with her and hold her hand. When things got really intense she asked for an epidural, but by that time it was too late.

It was delivery time. This was beyond what I ever imagined it would be. Can you imagine Jen screaming? I'll never forget. She was having very strong contractions, squeezing my hands, pulling me in a tight hug, screaming and saying things like, "I can't do this!!!!" Thoughts like, "I hope she can survive this" and "where's the doctor, she dieing" were going through my mind. I'm terrible about forgetting life events that I don't record and really didn't want to miss this event. So between contractions I grabbed the video camera and held it in my free hand pointed back at the action. I don't think I've ever been in a situation quite so intense and personal. Jen could hardly feel the final contractions and delivery of the other children, it was even peaceful in some ways to see her smiling and saying, "it feels like I have to push." I was squeezing tears out of my eyes terrified of why she was in so much pain, and if it was possible to endure it.

Finally Dr. Robbins showed up and just minutes later with a huge scream and a push out came Alexander Paul Berry! His head at least. He was a true blue Berry. They said Alexander's cord was around his neck and I saw Dr. Robbins grab it and pull it from around his head. Then the rest of him came out. But, Alexander wasn't breathing, he was sort of limp. I was really anxious, they handed him to Jen and let her hold him and when he let out a little scream they let me cut the cord. Later they explained that they couldn't cut the cord until they knew he was getting oxygen into his lungs. He still didn't breath very well so they put him on the warming table and gave him some oxygen to get him breathing. I was holding my breath too just waiting for that first scream, then it came. The nurses were very calm which kept me from panicking. While the nurses were helping Alexander breathe, Dr. Robbins was stitching a small tear in Jen.

Jen was pale if not yellow for the next day and a half (and she had a sore throat). Alexander turned out perfectly healthy and Jen survived the hospital without having to swallow a pill or take anything intravenously. She did request child's Ibuprofen so she could swallow it without gagging.

If you want to see the video, it will have to be a black market deal because Jen has forbidden me from allowing anyone to see it. That may change over time however. Maybe after baby 5! (j/k Jen). 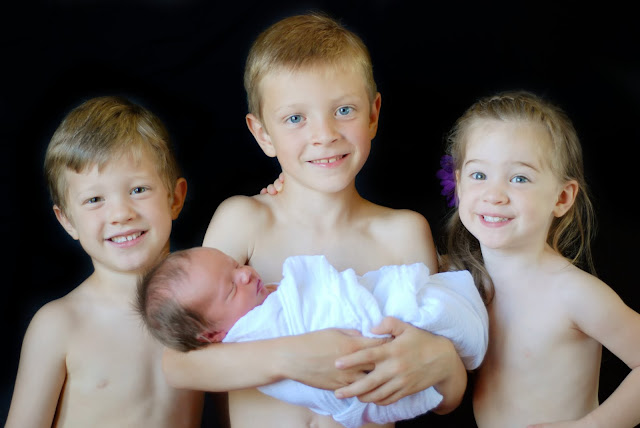 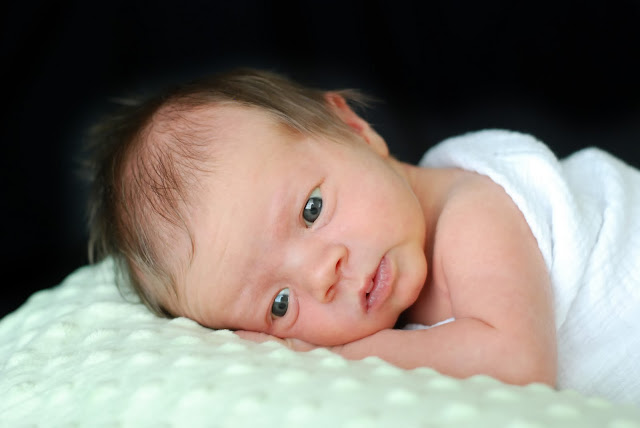 That was REALLY great to hear a husband perspective!
And Jackson... I DO want to see that video!

Thanks for sharing that! Neat to read Jackson's side of the story.

These were so awesome to read. And that last picture of your little boy... SO CUTE. Your babies always come out with the craziest, cutest hair! Having done labor without medication TWICE, all I can say is... I know exactly what you were feeling. =D

Oh, memories. That is REALLY hard. Way to go.

I love the picture of the 4 of them, so cute!
I love births, they can be such a bonding time for a husband and wife. It was neat to read "jackson's side." My hubby always has things to add, that i don't remember.. makes me glad that he is their too.