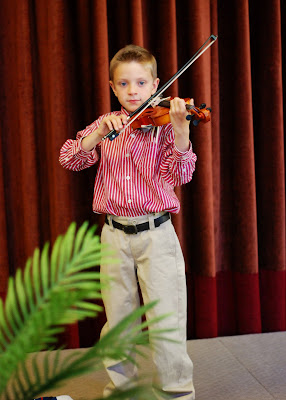 Thomas had a violin recital this weekend. If you are familiar with the Suzuki method of learning music you will know that students learn a song, then review it and review it and review it. They don't pass it off and move on. They do move on to new pieces, but a large part of daily practice is spent reviewing and improving learned pieces. Thomas and I chose "The Two Grenadiers" for him to play at the recital because it was an exciting piece and also because it had been reviewed enough that he felt confident that he could play it well. He (we) worked very hard on polishing it and he did a fabulous job! He did all of his bowings correctly and kept his bow straight the entire time...both things he worked very hard on. Thomas is such a hard worker. He is developing a great love for the violin and for music in general.

He also played "I am a Child of God" in sacrament two weeks ago. I accompanied on the piano and Jackson played a duet part on the cello. We had talked about how the reason we play music in church is to invite the spirit into the meeting. I asked Thomas to pay attention to how he felt as we were playing and afterward he told me that he felt very warm and happy inside...I did too. There were many wet eyes in the congregation. I am always amazed at the way music touches the soul and invites the Holy Ghost into our hearts.

Here is the video of Thomas at his recital :)

You have the most amazing family. Thank you for posting that:) I love Tom-O!