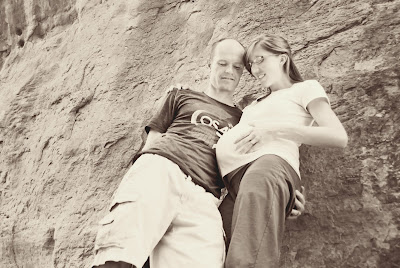 I am now officially a couch potato for the next week and a half at least. I had been noticing contractions all morning (and also through the previous night because I was awake so much). I drank as much as I could and then took a nap after lunch thinking that would be the end of the contractions. I woke up at 2 and they were still coming, so I began timing them. I timed them for a couple of hours while trying different methods to get them to stop. They just kept coming consistantly every 6 to 10 minutes. They weren't intense contractions at all...very mild, but they weren't stopping. After dinner, I took a bath as a last step to get them to stop. It didn't work, so I finally called my doctor. Luckily, he was on call and was at Labor and Delivery. Jackson and I dropped the kids off at his sweet sister's house and went up to see the doctor. I was dialated to a 2 and 60% effaced...which doesn't say much because I could have been like that for weeks now without knowing it. My doctor said that this late in the game (I am 35 weeks and 4 days) the drugs to stop labor are less effective than bed rest and have undesirable side affects, so he prescribed fairly strict bed rest until I am 37 weeks.

We are lucky that Jackson's job hours are flexible and much of his work can be done from home. He will be able to help a lot. Jackson's mom already took my laundry and is taking the boys on a hike in the morning, bringing lunch, and bringing dinner tomorrow. She is so kind.

I am not looking forward to this next week, but I am determined to do everything I can to keep baby Alexander inside where he can develop the best until it is safe for him to come into this harsh world. After Estella's long bed rest, a week and a half seems easy. The things that make it harder are that we are busier...soccer practices and games, back to school nights, school starting on the 23rd, music lessons, birthday parties...all things that are important to the kids. Soon enough it will just be a memory, and it will have been worth it.

Please calm down, uterus!
Posted by berrymom at 1:51 PM

Jen,
Good Luck, Your are such a great mommy! I LOVE the name, way to cute and comes with so many nicknames. That is so nice to have so much family support close by.

Good luck Jen! You are almost there. :) I love the photo.

We'll pray for you and little baby.

Oh... these last few weeks are hard.. I feel ya. I love love love the name.... The same-ish but totally different:)

lol, Im glad I found out about your bed rest over the internet:) I think I need to call you.
Im so sorry, wish I was closer to help out with things. LOVE YOU!!

Time to catch up on reading! Have you read the Hunger Games?