How much is Thomas' old drawing worth?

It is worth 3 dollars to Nicholas. This is an old drawing...as you can see by the sun faded corner. Nicholas found it last night and started admiring it. Thomas noticed him, and an old forgotten piece of paper instantly became VERY valuable to him. Soon, both boys were screaming hysterically. Jackson intervened and a very interesting thing happened. I'm not sure how it came about, but he told Nicholas if he really wanted it, he would have to pay Thomas for it. Nicholas quickly ran off to find his birthday money. Jackson said, "Nicholas, how much will you pay Thomas for it?" "Three dollars." "Are you sure you want to pay three dollars...I would pay one quarter." "Three dollars."

Nicholas is now the proud owner of Thomas's artwork. It has since been turned into an airplane. 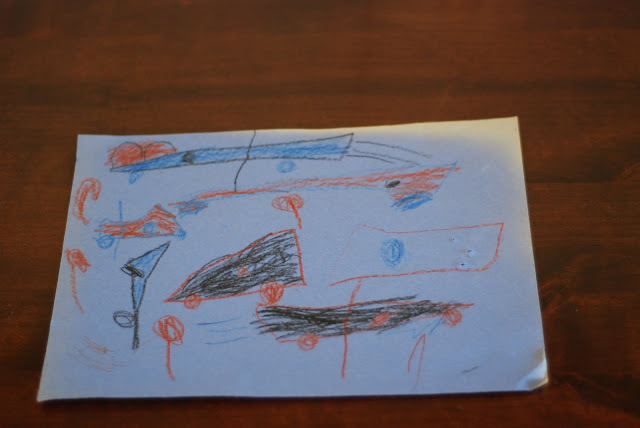 That is hilarious! Smart and a great price!

That is one of the cutest stories I have ever heard. I think I would have had a hard time not laughing as well. What a genius way to solve a problem, I am very impressed with Jackson.

hahahaha! That is AWESOME. That'll be a story that the family tells throughout the years for sure. Perhaps Thomas will indeed become a well known artist...and it all started here.

What a great purchase! Well worth the three dollars.

That is the cutest story. I'm sure your boys will laugh about this for years when they are older! I know it made my day.