I wanted to stay busy the week and a half that Jackson was gone, so I enrolled the boys in swim lessons during those weeks even though the water is still a little chilly at the pool we go to. Nicholas was in "Aquatot 3" and Thomas was in "Waterworks 1."

Nicholas is a pro at back floats. He is great at filling his tummy up with air and relaxing on his back. By the end of the two weeks, he could back float unassisted. He was pretty hesitant to get his face in the water. The first few days he did great, but as he got more comfortable with his teachers, he felt more open to telling them he really didn't want to do that. His teacher aka "Mr Giggles" was positive, encouraging, and fun, which was perfect for Nicholas. He suggested filling up the bath with a lot of water and letting him practice getting his face wet there where it was more warm and comfortable. We did that, and by the last day of swim lessons Nicholas was excited to do his bobs and willing to try a front float. Good job Nicholas! 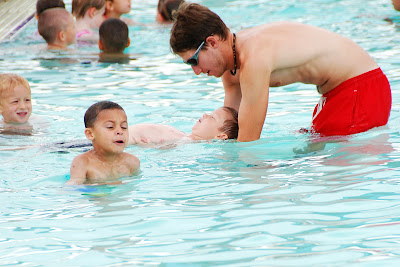 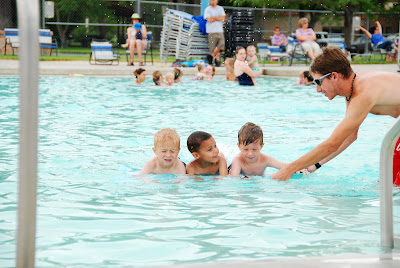 Thomas is getting better and better at swimming. He listens carefully to his instructors and is learning good form on his strokes. He can glide like a champion and does very well with the front crawl. He has a hard time going farther than he can hold his breath because it is hard to time the breathing, but he is getting better and better. His least favorite is the back float, but he doesn't complain and just does his best. He was sad to have his last day of lessons and is asking when we can go back for more. I think I will try to get us to the pool to play and practice the things they have learned several times and then sign them up for one more session toward the end of the season...maybe the beginning of August. 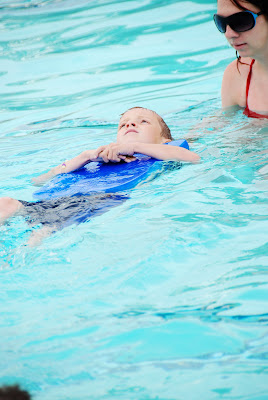 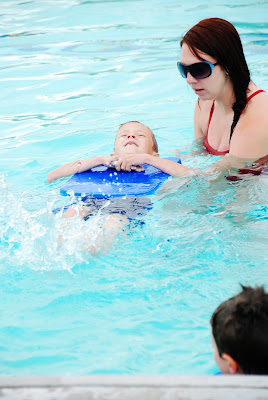 Estella and I hang out on the "splash pad" while the boys are swimming. If we ever made it there early the boys enjoyed playing there before their lessons started. 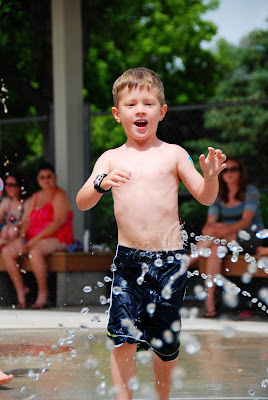 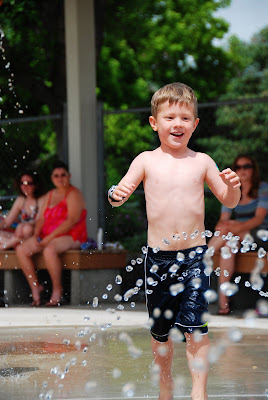 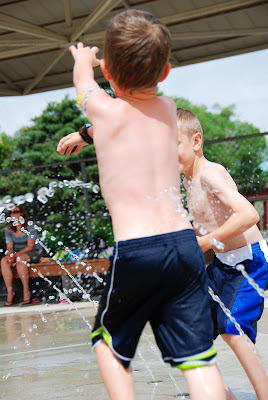 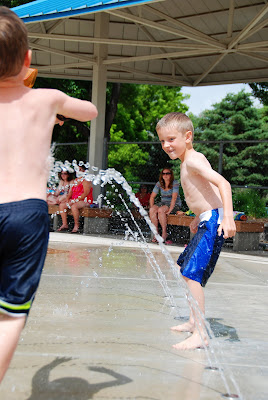 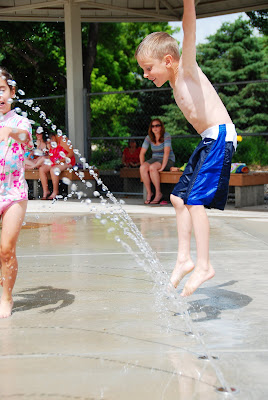 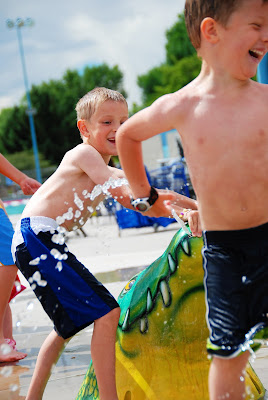 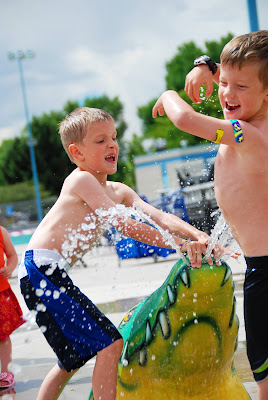 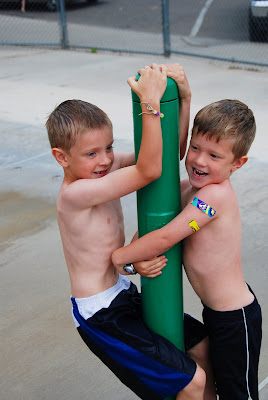 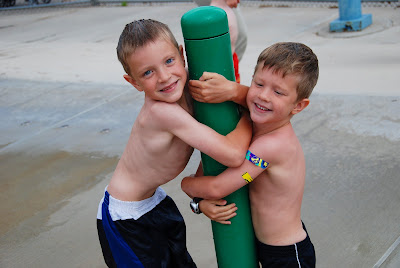 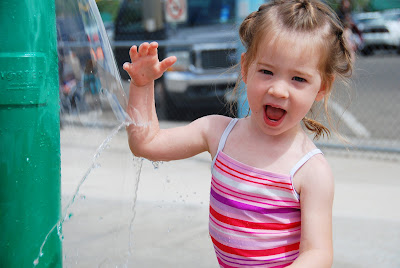 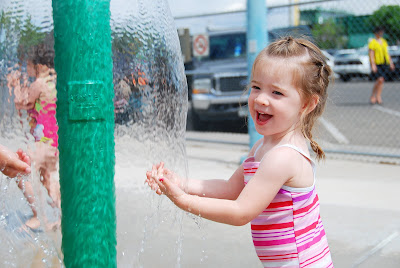 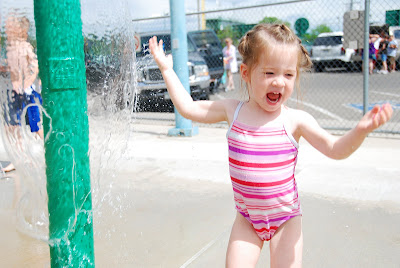 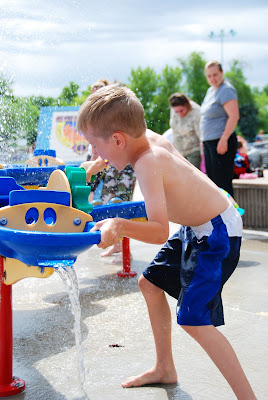 I love how Thomas is subconsiously crossing his fingers while he is jumping with excitement. 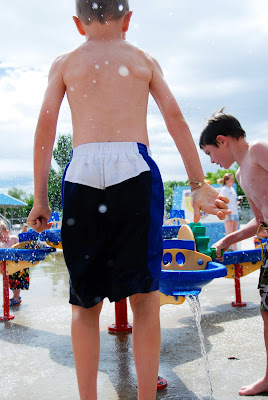 Nicholas had two shots before lessons this morning. I am still baffled by how many shots they recommend for these little guys. I find myself wondering if they are all necessary. I did a lot of research before Thomas was born and decided to go ahead and do the recommended vaccinations. I swear, though, there are more now than when I did all my reading about them. Thomas had 5 before kindergarten and they gave them to him all at once. That was a horrible experience, so I promised myself that I would never give my child more than two at a time. Nicholas needed three this year, so I did two and we will go back for the other one in a week. Then he has the dose of 5 next year before kindergarten. I will break those up as well.
He amazes me with his bravery. He sat up and just watched everything the nurse did. When it started hurting, his sweet face got tense and a bit red, but he didn't cry. After it was all over, he looked upset and I told him it was okay to cry if he wanted, but he just shook his head and said he was fine. The nurse told him that he was her hero. He liked that. 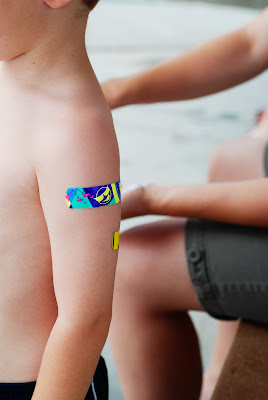 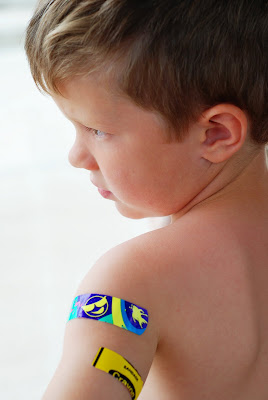 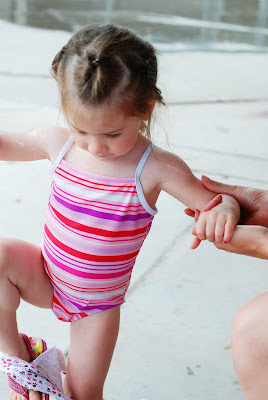 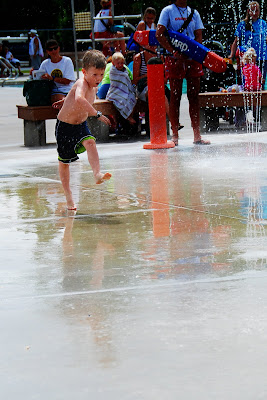