I knew it would happen someday...

...but I didn't think an older brother would be involved. Nicholas and Estella cut her hair while I was taking a nap (I guess that means I should stop taking naps?). They were supposed to be having 'rest time' in their separate rooms. I have been too lax on enforcing the separate room rule because I like it that they want to be together playing. It hasn't been a problem until this. I still don't know exactly what happened...who's idea it was, who actually wielded the scissors...but I suspect it was Nicholas. He says she did it, she says he did it...either way it was done and her hair was chopped to the shoulder on one side and to the ear on the other. They left the back alone, fortunately. I woke up from my nap, rested and happy, oblivious to the mischief that had taken place. Neither one of them said anything and nothing seemed amiss. I didn't notice until about an hour later when I had a few minutes to comb Essie's hair (yes it was in the afternoon and I hadn't combed it yet). I started combing and immediately discovered the damage. I asked Estella what happened to her hair and she offhandedly said that Nicholas did it. I looked over to Nicholas and his face was beet red and he wouldn't look at me. I'm sorry to admit that I then lost my temper and yelled, "Nicholas what did you do? Where did you cut her hair?" He said she did most of it and that they did it in his room. I rushed in his room and couldn't see any hair anywhere. I asked where the hair was. He produced a cup full of hair that had been hidden under his bed...sneaky. After thinking for a while, I decided on this punishment. A little old fashioned, but I couldn't think of anything else that seemed appropriate. 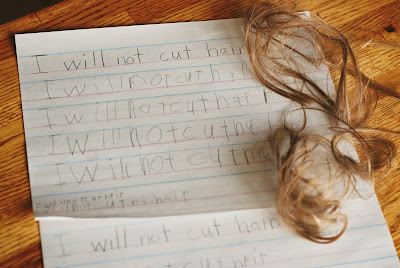 I ended up cutting her hair a few days later to her shoulders. She looks like a different little girl. I love her short hair...it is darling. It is definitely easier to take care of. I will post pictures soon.
Posted by berrymom at 7:11 PM

I'm sorry. I laughed a little reading this. :) Only because it happened at your house, not mine.

Ahhh, yes- that is one of those "not if but when" moments of childhood:)Funny that he hid the evidence under the bed. Can't wait to see the new 'bob' -bet she's darling!

I am dying to see pictures! Lately I have been thinking about how lucky it was that David cut Abby's hair when he did -- it was heartwrenching at the time, but in retrospect, I'm glad he did it when her hair was just starting to come in, instead of say... now! I think I would die if we had to start over at this point... after waiting for so long. I bet Essie looks SO cute! I think every kid has to learn this lesson at some point. Your method is brilliant.

I am laughing out loud! "I will not cut hair. I will not cut hair." Priceless! I bet he learns the lesson. And Estella is cute as a button no matter what! I'm sure it's just a matter of time before my kiddos get into such mischief!