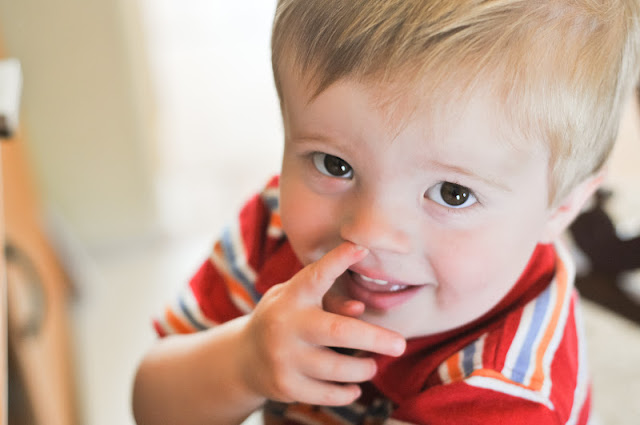 Alexander had a nose adventure several weeks ago.  The way it started was he stuck something up his nose.  I have no idea when that took place, however.  I didn't know anything was up there until it started to smell.  For a few days, Jackson and I had been commenting to each other that Alexander had bad breath.  We couldn't figure out why.  We started flossing and brushing his teeth with extra vigor, which didn't even make a dent in the rotten breath.  Finally, I caught a glimpse of something up there while I was changing his diaper.  At first I thought it was a big yucky booger, but after peering up his nose using a flashlight I realized it was definitely not a booger.  I couldn't tell what it was, though.

Once I realized something was up there, I started thinking back over the previous few weeks.  There were so many signs that I should have clued in to before the smell.  Alexander has never had a problem getting his nose wiped.  In fact, he loved blowing his nose and gladly did in any time I wanted him to.  Well...about 2 weeks before he began smelling bad he began crying hysterically any time we got close to his nose with a tissue.  I didn't think anything of it because kids go through phases.  Also, about 2 weeks before the smell he started frequently sticking his finger up his nose.  That is completely normal for kids, but I should have noticed sooner that he was only sticking his finger up that specific nostril...never the other one.  He would usually say "nose, nose" in his own cute way when he did that.  I am sure he was trying to tell me that something was up there.  Also, the week before the smell I noticed that he had a slight runny nose, but it was only coming out of one nostril (the one without the object stuck in it).

When Jackson got home from work, I told him of my discovery and we tried a few methods to get it out.  We tried using the bulb syringe which didn't work at all...I didn't expect it to, but I had to try.  Next, we tried the blow method a doctor taught us when Essie put a pea up her nose.  It works like this...(1) you plug the unobstructed nostril, (2) you give a quick, strong puff of air through their mouth (kind of like CPR).  The hope is that their epiglottis closes off the passage to their lungs and forces the air up their nose.  This didn't work at all.

We gave up and put him to bed.  I called first thing in the morning and got an appointment with the doctor for later that afternoon.  When we got there he looked up his nose and said that there was indeed something up there, but he couldn't tell what it was.  He was a bit hesitant to start digging around up there, but relented to my begging.  He was wonderful.  He let Alexander sit on my lap the entire time.  He put a head lamp on his head and took an instrument that looked like a small plastic yellow crochet hook.  Once he got up far enough, Alexander started protesting, so I held his head still and the doctor hooked out a whole almond!  I was floored to see a big whole almond coming out of that little nostril!  The almond skin has mostly disintegrated, so it was almost all white and it stunk...really bad.  He asked if I wanted to keep it...I just laughed and said "No thanks!"

The doctor gave him a prescription for antibiotics to clear out all that gross smelling bacteria.  He was stink free within a couple of days.  Thinking back, I think I know when he put that almond up his nose.  We eat a lot of nuts at our house.  I buy bulk bags of raw nuts, toast them in the oven, and keep them handy for snacks.  Alexander has his molars and does fine with a whole almond.  I remember passing him a few when we were driving around in the van a few weeks before the smell.  I think that was when he stuck it up there.  I am just glad it is out and that I have a sweet smelling Zandy Boy again!
Posted by berrymom at 7:38 PM

I found that story both really gross and really fascinating! :)

p.s. Great minds must think alike... I notice we both ended up changing to the same new blog template!